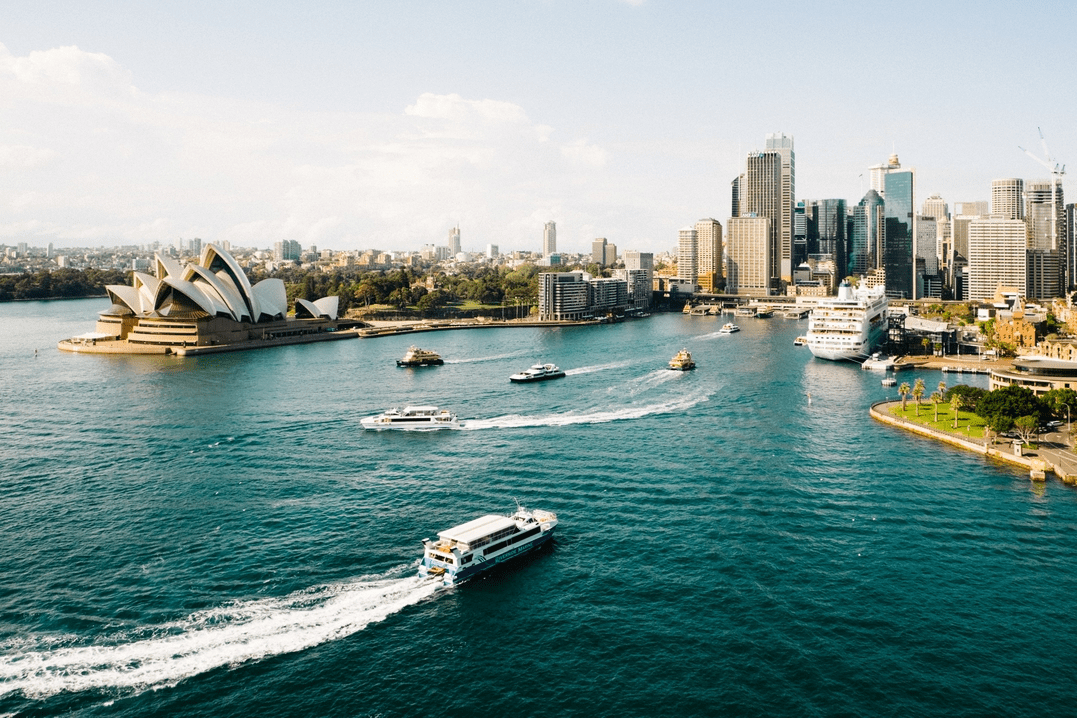 Typically, towards the end of each year China’s coal imports decline, only to restart with vigor early the next year. Argus media, a media organization focused on commodities, say that this slowdown, officially blamed on customs clearance issues, has happened for the past two years. Of course, this official explanation has shown a remarkable regularity at the end of the year when China has mostly satisfied its domestic need for coal. In both 2018 and 2019 around November, a line of coal trucks kilometers long would sit at Mongolia’s southern border with China in below freezing temperatures waiting to be processed.

As early as November, New Hope, and Australian coal miner, said they believed Australian coal imports were simply being delayed until January. Yet this year seems to be different. The recent trade spat between China and Australia has resulted in China eliminating clearance restrictions from several countries, except for Australia. 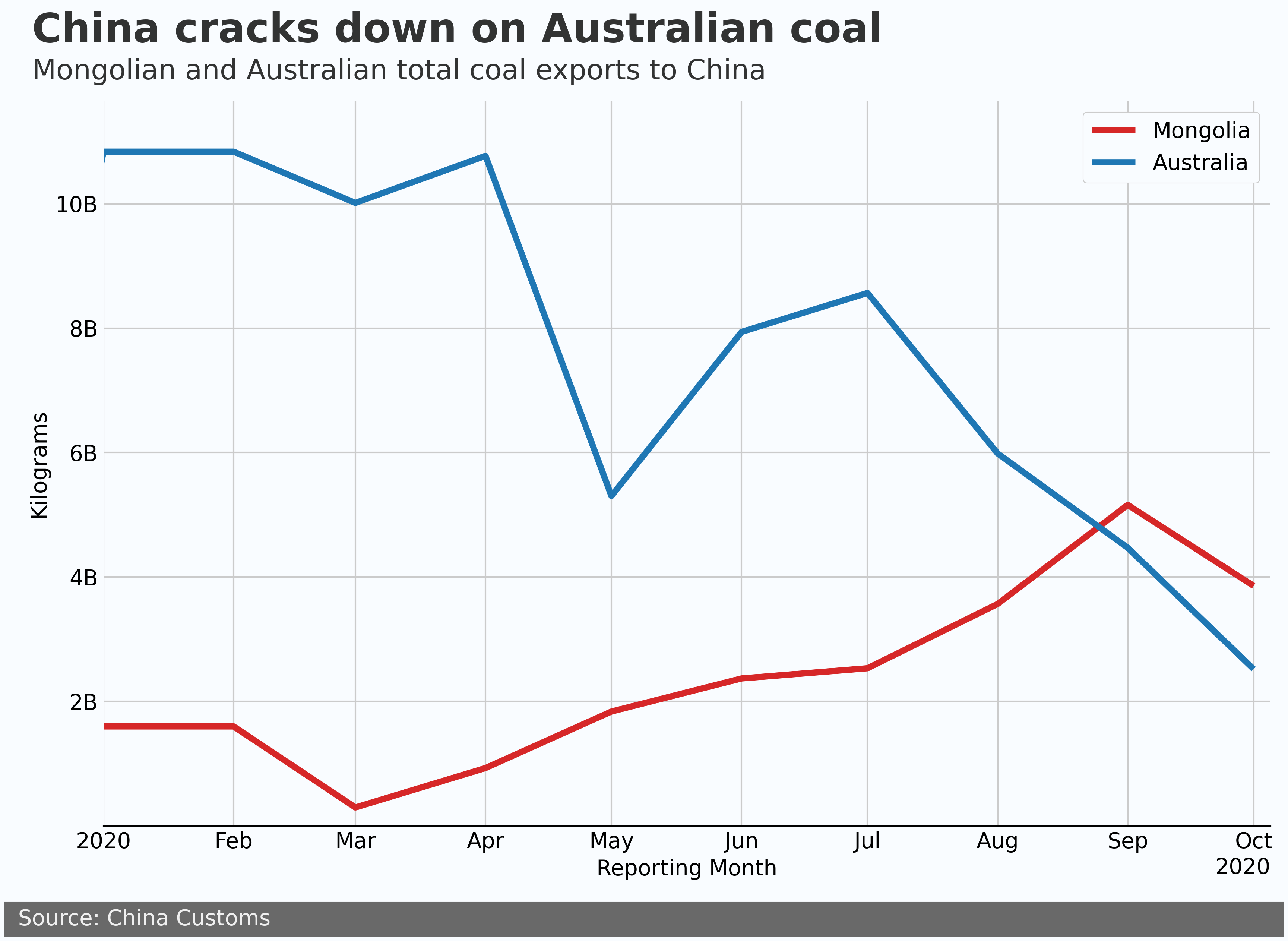 Since July, Mongolia’s coal export has been ramping up and trying to make up ground that it lost due to coal exports dipping to near zero in March. Mongolia’s Finance Ministry stated in 2019 that mining revenues made up 27% of the state budget. In addition, prior to just a few days ago Mongolia might have been looking at a hard slowdown of customs clearance for coal exports at the border in November. This race to the finish has not been kind, with total mineral products exports down $10.7 billion USD at the end of November, year over year, according to the National Statistical Office.

While the spat between Australia and China would seen to be an opportunity for Mongolia, it is important to keep in mind the type of coal that Mongolia predominantly exports to China. Since 2019, 85% of Mongolia’s coal export to China has been coking coal, which is used in blast furnaces as part of the steel production process. During the same period, only 42% of Australia’s export to China is coking coal, with a large portion of the rest being used for thermal coal to generate electricity and heat.

Nevertheless, for the past few years Mongolia has been running up against China’s de facto coal quotas. With Australia sidelined, Mongolia has a significant opportunity to ramp up coking coal exports. 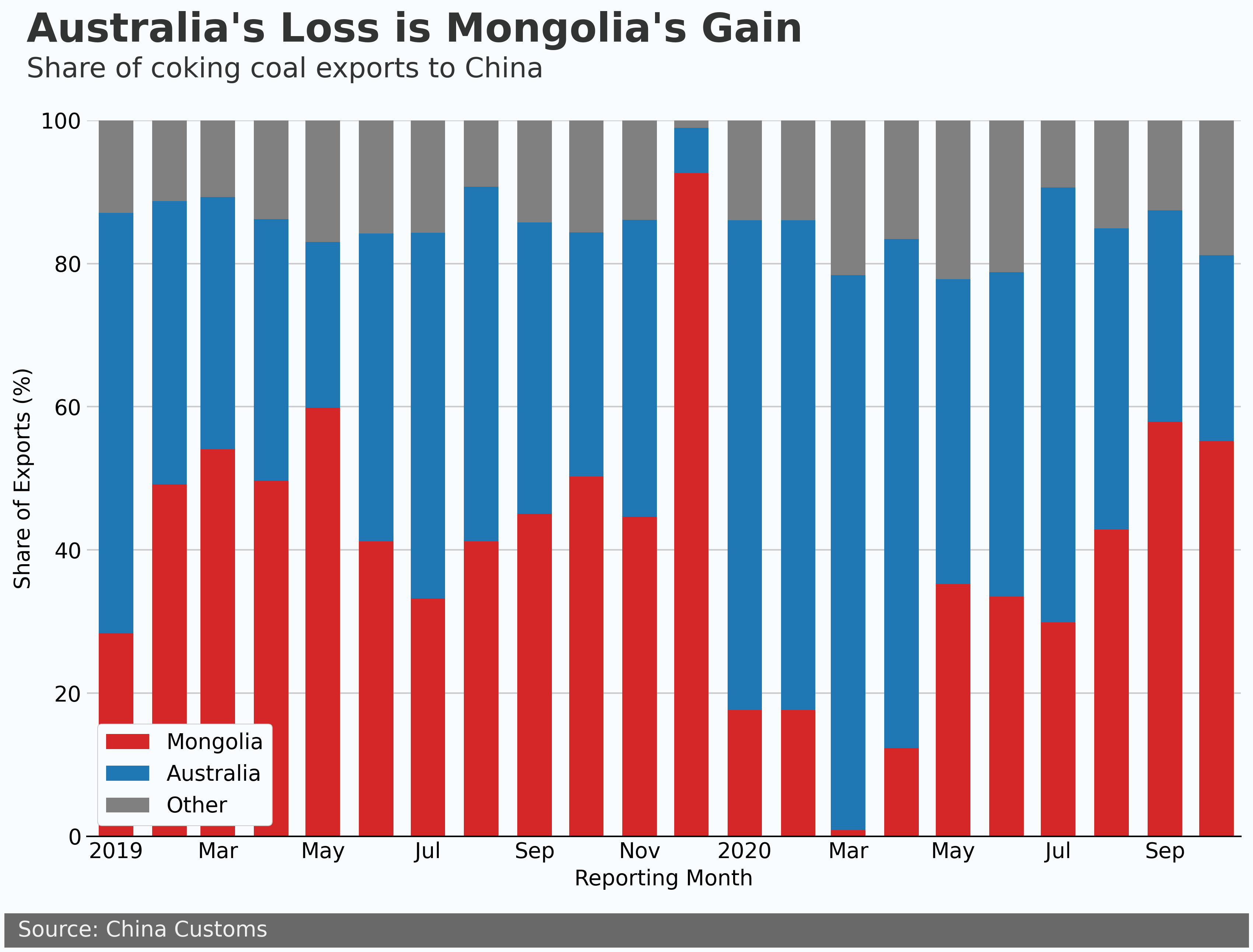 Challenges remain for Mongolia. Currently coal is still trucked to China, and the under construction Tavan-Tolgoi Gashuunsukhait railroad is scheduled to be completed in 2022. This railroad will improve margins by reducing transportation costs and speed customs clearance, which will result in higher revenues and increase export ability. Until then, the main bottleneck is still customs clearance with China.

The recently opened “green channel”, which optimizes clearance of cross-border freight and related personnel, has been said to help. Yet due to the recent outbreak of COVID-19 in Mongolia, China insisted truck drivers entering the country be tested before being allowed to cross the border. Currently there is a big opportunity in front of Mongolia, and we will see early in 2021 if it can take advantage of it.