Would you pay this much for the country’s “best” license plate?

Numbers mean a lot to most Mongolians. Generally, 1, 3, 8, and 9 are considered “lucky” numbers. Mongolian phone numbers have 8 digits, and the first 4 of these numbers can tell you a lot about who is calling you. So-called “lucky” phone numbers beginning with 99 or 88 regularly sell for anywhere from $1,000 (9999-XXXX) up to $20,000 or more for the most elite (9911-XXXX). These phone numbers are sold on the “secondary market” from person to person. If a 9911-XXXX number calls you and you don’t answer, expect them to be upset…

Unfortunately, license plate numbers are assigned to a vehicle and can’t be transferred between individuals. In addition, up until recently, you couldn’t pay for a better license plate number. This caused a situation where the “best” license plates (think 0001-УБА) somehow ended up on Mercedes G-Wagon’s and Land Cruisers. I wonder how that happened?

The general public always knew what was really happening. At one point frustration was so high that there was discussion of giving these lucky numbers to garbage trucks or other city vehicles. It seems their voice was heard when the new Motor Vehicle Registration Country Number Procedure was approved in late 2020. This procedure set up a system to allow “lucky” numbers to be auctioned on the Vehicle Registration Department’s website. This has been generally viewed as a positive development, as those willing to pay for this special license plate could pay legally for the privilege and contribute to government revenue and social programs. 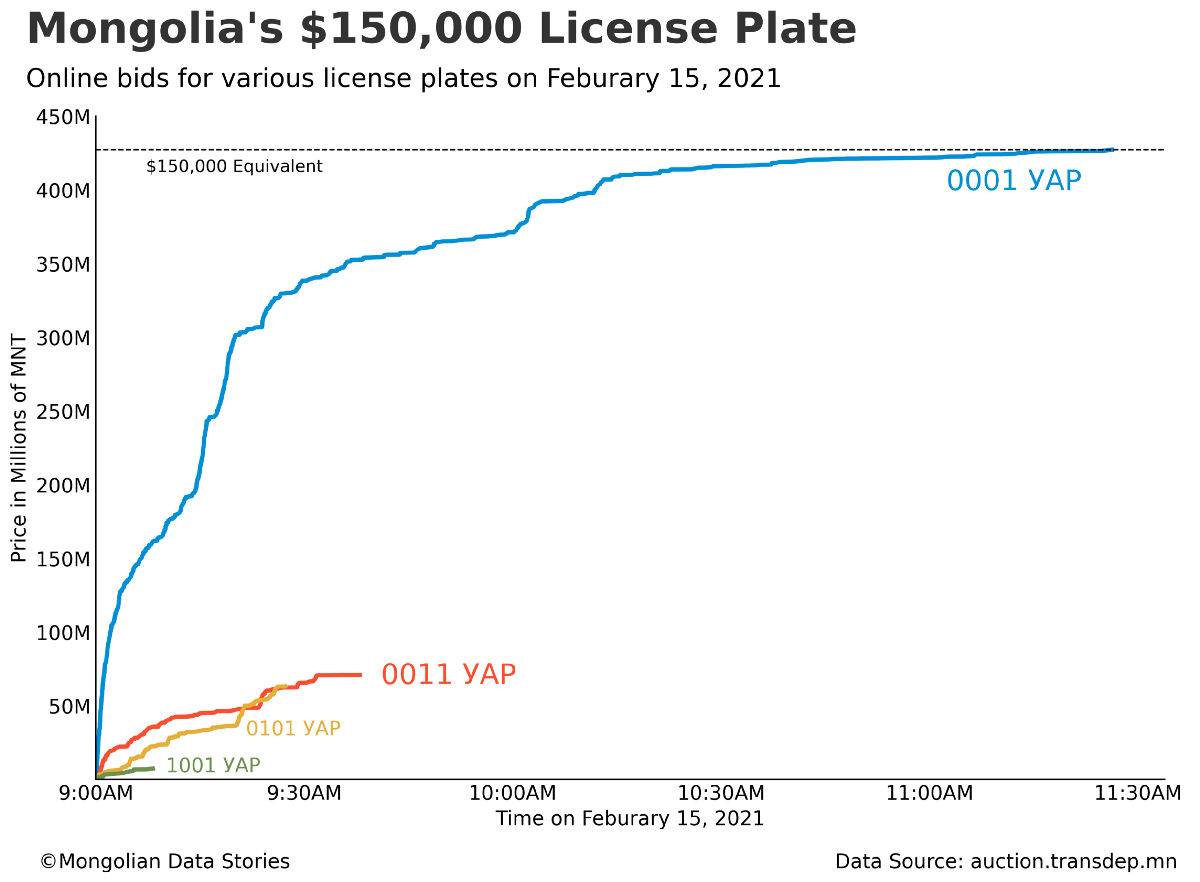 Anyone bidding on a license plate number is required to put in a deposit for their bid of 50,000 MNT (about $17 USD). There were 957 bids for 0001-УАР. Those who didn’t win the auction will have their deposits returned. The winning bid is now expected to pay the total amount. If they don’t pay or are unable to, this number will go up for auction again.

It’s unclear how much of this auction was real interest or social media hype, as this particular license plate went somewhat viral on various Mongolian language Facebook groups. To put things in perspective, the average yearly salary in Ulaanbaatar, the capital, is about $5,300 USD.